Murder on the Rockport Limited, Live Show by The Adventure Zone 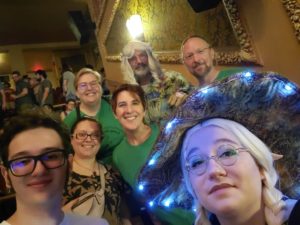 Have you ever heard of “The Adventure Zone”? If not, it’s a fun podcast where 3 brothers and their Dad, play Dungeons and Dragons. My child Anika introduced me to it. I have not gotten very far in the podcasts, but what I heard so far, I enjoyed. So when it was announced the “The Adventure Zone” Murder on the Rockport Limited Book tour was coming to Austin, we as a family decided to all go.

Hence on July 17th my family and I drove to Austin, which is a two and a half hours drive. The show took place at the Paramount, which is a beautiful nostalgic Theatre in the heart of Downtown Austin. Right on South Congress, you can see the Capitol from the street.

We met our friends, which we thought we were sitting with, but more on that later. Three of us donned Camp Good Friend Shirts. My husband was Merle, Anika was Taako and Lars dressed as Magnus. There were lots of great costumes in the audience. We were on the balcony and when we got to what we thought were our seats. We realized that my family was on the opposite side of the Balcony and we found our seats. As we were sitting down I spilled my cider on myself. (I am a klutz). The good thing was, that is was cider and didn’t stain, I was just sticky for the rest of the day.

On the dot at 7 pm, two of the brothers came out and to all of our surprise, Miles Luna from Roosterteeth was the Moderator, which was very exciting for Anika. Her goal is to work for them in the future and Miles is one of her favorites.

The Q & A was hilarious and a lot of Questions about how Murder on the Rockport Limited graphic novel was realized were answered. I forgot to mention, that with our tickets we all received a copy of the book signed by one of the cast members. Inside was a “Train Ticket” To the Rockport limited. It gave us a great insight into how the novels came about and the hard decisions on what gets cut and what will be kept. Like thrilling train heroics.

After an intermission that seemed to take forever and we decided to move over to some free seats. The cast had added some more people from Rooster Teeth to do a Table read. Those people were fantastic, the crowd loved them. I haven’t laughed this much in a while, it was lovely that on the big screen showed captions of the actual Novel to read along. It made it easier to imagine what was going on as well. Hence even without knowing the podcast that well, I was able to enjoy the whole evening.

As the actors read the podcast came alive for me and I realized that this was something I could definitely get into. The characters are so much fun and we all know a Taako, a Magnus or a Merle in our real lives.

I have listened to 50 episodes of the podcast, we did a trip to Florida and spend a lot of time in the car. And I have fallen in love with these characters. I love how they grove and move. We also get a glimpse of the family dynamics, which is kind of nice to see as well. Griffin is amazing with all the voices he does as the DM and the other 3 do as well, almost all of them.

Therefore I can only recommend this podcast. Even if you are like me and don’t’ know much about Dungeons & Dragons, but enjoy silly and awesome storytelling.

What podcasts do you listen to? Let me know in the comments.