What qualifies as a weekend of Family, Cars and Beer ?

This past weekend we had a Haunting of Impalas weekend in Dripping Springs. I am almost certain that this will take more than one post. So bear with me while I explain Family, Cars and Beer. 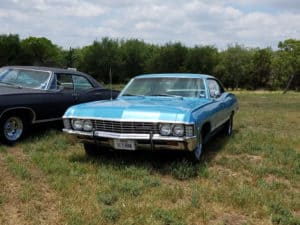 After some complications to get our beautiful blue Impala registered. We left Saturday morning at 8:30 am for Dripping Springs. I was a bit sad, I would have loved to ride in Baby Blue, but since she had not been on the road in a while, we decided to take a second vehicle, just in case. The drive was gorgeous and I am glad it wasn’t to hot, since we do not have AC in the car.

We did the obligatory stop at Buccees to introduce my mom to Beaver Nuggets, which she really liked. The drive was uneventful. We met up around 11:30 with Adam and Lisa of our Impala Family. They own Renegade, which our Texas fan should be familiar with and she will be at ComicPalooza next weekend as well.

All of us were supposed to meet before heading to the brewery, but Rick from “Everything Supernatural” called and let us know that Bella had overheated. Then while we waited we got the news, that Bela was no longer able to come due to Mechanical Issues. It was decided that we should go ahead. While that conversation was had. Dana showed up with Ruby 2.0, we got her off the trailer and started and then headed to the brewery. As with these old cars, we had a few hiccups, like baby blue doesn’t like to be revved to much when going backward. But we made it and there we were at the Family Business Beer Company in Dripping Spring. If you don’t know the significance for this, then you might wanna read up on Jensen Ackles. *wink

The Brewery is tucked in right of off Hamilton Pool road about 20mins from Austin. I love the Hill Country and driving in Baby Blue from the Hotel was awesome. At the Brewery, Christine and her car Lucy joined us as well. We had to park in the back but met new family members that helped to keep out babies save. Travis and Jon were awesome for parking their rental, to save room for the others that were yet to come. I know these names mean    nothing to you, but to me they are family.

We finally get to the brewery and my mom and I decided to share a flight of beers. We chose the following

beers “Hamilton, Aurora, IPL India Pale Lager and their newest one Spree” it was $10 for the flight. All the men, got 3 of the picnic tables together, to make sure we all had spots to sit. My husband got his own flight and I am no longer sure what he got.

After a while of chit chatting, we got hungry and went over to Jeb’s Southern Cooking Trailer. I had the BLT and my hubby had the Etoufe and it was delicious. By that time, we had also finished out flight and I decided that the Hamilton was my favorite, followed by the India Pale

Lager. But I really wanted to try the Summer Spree, which was a Berliner Weisse, infused with Watermelon and Basil.

After all the trouble they had, the rest of our Impala family showed up and we finally had all of them there. In the end, there were 7 Impalas lined up in the parking lot. Jason with Let’s get Geeky, Rick came in Hilly with Jan from Supernatural Angel. They joined us outside and it felt like a big family reunion. The Dallas Women of Letters had also their Finale party there and took some of these amazing pictures you see in the blog post.

We all sat and had great conversations. I made new friends, which quickly became family. I found another Fan that appreciates Sammy and we agreed we will share him. This is the part of the Fandom I love, and I tucked that moment, right there, in the Texas Hill Country into my heart, forever to keep. It was a long day and since we all stayed somewhere else, kind of dispursed at Dawn to meet again on Sunday.

We went to join Adam and Lisa at the Air BnB after we grabbed some phenomenal Italian Food from Carmela’s Pizzeria and some drinks. I had found some Grapefruit Cider from Austin East Ciders and I am digging it. At around 10:30pm we called it quits, as we were exhausted from being outside most of the day. But what a wonderful ending to a gorgeous early Texas summer day.